Roscoe went off his raw food…

Roscoe seriously went off his raw food after his tangle with the mystery stomach bug last month.

He recovered slightly and began eating about half his dinner but he wasn’t getting back into it the way we expected.

His brush with the bug seemed to put him off his food.

Maybe he blamed his food?

I was once violently ill as a child shortly after eating a chocolate mousse – never eaten one again (I don’t drink whisky for a similar reason but that’s a story for another day).

Nudging around the bowl…

I can’t remember the exact length of time, but it must have been going on for about a week…

Roscoe eating half his allotted grub and just nudging the rest around his bowl.

I was seriously beginning to think about moving him back to our dry food.

I brought it up with Gill and she was just ‘No’.

Moving back to dry food meant going back to the big and plentiful plops we’d gratefully left behind.

February was so rainy that it was not a pleasant thought at all.

We had to find a way to rekindle Roscoe’s love of the raw.

Plop related aside – avoid if squeamish:
There seems to be a hierarchy of plops associated with dog’s food.
Food with grains/rice – lots of and sloppy.
Food with no grain – fewer and definitely firmer.
Raw food – very few, very small and firm

Bringing back the raw food love…

There was only one recent dinner that Roscoe had eaten fully.

We love him dearly but there was no way we were making him a Sunday lunch every day.

But maybe we could simplify it…

Those bags of frozen mixed diced veg are perfect because the veg is so small all you need to do is add boiling water to unfreeze it.

Drain the water, then simply add the veg to the hot gravy and that warms the veg.

Gravy and Veg – the simple way…

So we added our warm gravy and veg to his raw food and mixed it up.

He tucked in with gusto!

We tried it again the next night – same result – devoured!

We then tried removing the gravy and leaving the veg – he still loved it.

He really seems to love that veg, it’s cheap, nutritious and easy – so we’re still including it in his meals if the leftovers of the evening aren’t all that.

He’s never enjoyed his food more – it is getting absolutely demolished immediately.

The struggle is real…

Lots and lots of people struggle with dogs not eating their dinners – both dry and raw feeders.

If you’ve had that issue and then discovered a fix that kept on working please do let us know with a quick reply to this email.

It would be so useful to get together a list of everyone’s tips so we can help anyone going through it – if you’ve struggled with it you know how worrying it is.

If you’re considering moving to raw food all the links to our tips and blog posts about how to make the switch successfully can be found here: https://shop.bounceandbella.co.uk/collections/raw-dog-food

Details on how to get 20% off your first raw food order are also there (you can also use the code if you’ve never used it before).

This weekend finally looks like Spring has sprung – have a wonderful one!
Darren

PS
Remember me mentioning Katherine was showing two of her Norwegian Elkhounds at Crufts? She messaged later that evening to say “Rosettes and a reserve ticket – great day”.
Congratulations Katherine! 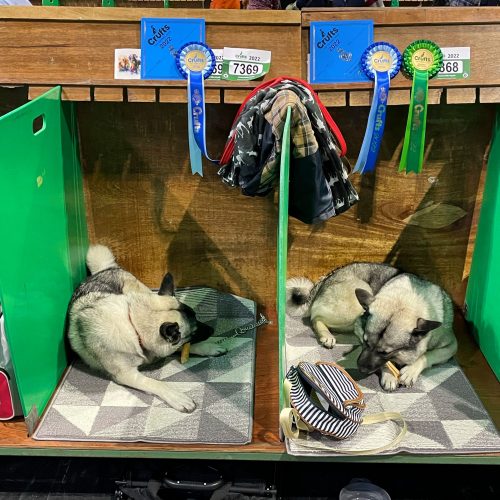